While the BBC continues to struggle with the difference between dressing up as a Nazi and actually being a Nazi, it's worth remembering that the BBC wasn't always that sensitive.

Ah no - dressing like a member of the Waffen SS might be verboten, but imitating a member of another murderous fascist organisation, why sir, that's some cutting edge documentary making that is. Hence why, just weeks after July 7, the BBC sent this guy... 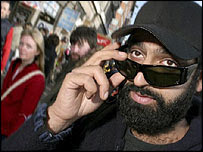