Lest we forget, long before the WuFlu made it obvious, British academia was already dominated by woke nonsense. The evidence is all over the place, but the undoubted winner of Best In Show is the rehab industry, a train wreck mash up of Marxism, New Age lunacy and the weirdo obsessions of a small group of privileged upper-middle class brats.
How full of it are these people? Even they don't believe their own doctrines, at least to judge by cases like this.
Two things virtually all criminologists agree on: escalation - meaning that over time this type of offender will commit more and more serious crimes - and, linked to this, that cruelty to animals often acts as as a gateway to committing the same type of crime on human victims.
All of which is by way of saying that this is a potentially extremely dangerous individual and so, naturally, the police have done.... what?
Don't ask the perfessional journaljismers! They've given it the memory hole treatment - no doubt influenced by the Protection of Sadistic Creeps Act (2019).
But wait... I just checked and there's no such act. No one ever voted for this. If it's true that the loony card is being used to let dangerous savages walk free then that's surely something the public has the right to know.
Apparently, justice *doesn't* need to be seen to be done, after all, just as long as it involves muh mental 'elf.
Local journalism is super important, you guys, but just not the type that involves reporting stuff.
We should totally give these guys a bail out!
Hey, I might not be a Certified Member of the Order of Journalists, but I'm thinking that a bloodthirsty maniac walking the streets might actually make a better story than, say, painting gorillas (no, seriously).
Posted by DJ at 11/23/2020 06:16:00 pm 1 comment:
Labels: Crime And No Punishment, Mental Elf, MSM

Everything might be going to Hell right now, but at least we can look back on the good old days when Britain's elite were at least *actually* elite.
Oops... guess the left won't even let us do that.
You know, for an unbiased organisation, it's surprising how whenever Beeboids come out with some deranged theory, it's always deranged in the self-same way. First we had the Countryfile bimbo explaining how the countryside was totes racisss you guys and now this:

BBC historian Lucy Worsley has said the Battle of Waterloo should not be trumpeted solely as a 'British victory' because of the firepower brought by European allies.

She said the Duke of Wellington deliberately glossed over the role the Prussian army played in helping defeat Napoleon in 1815 in order to boost morale back home.

Huh? Napoleon had been utterly beaten and was doomed to die in exile. How much more of a boost did it need?
But you read on and find out that she has Captain Hook's grasp of history:

She said: 'The European allies referred to the battle as the Belle Alliance and saw it as a European collaboration, but from the earliest dispatch sent back to Britain after the battle, Wellington was calling it the Battle of Waterloo after the place it was fought, playing down the collaborative nature of the victory.'

Yes, he called the battle after the place it was fought, the fiend!
Wait until someone tells her the Battle of Jutland didn't actually take place on the Jutland peninsula.
It's the tip of the iceberg, girl!
Meanwhile, back in the non-insane parts of the world, the casual observer is free to note how carefully any Germanic influence has been edited out of this famous painting.
Literally everyone who has even a passing familiarity with the battle knows how it all came down to the ability of the Anglo-Dutch forces to hold on until the Prussians could arrive. Asking how the battle would have gone without the Prussians is like asking how D-Day would have gone without air superiority. If it hadn't been for the Prussians then the battle would not have been fought that way in the first place.
Seriously, if there was any justice in the world this daft bint would be banned from calling herself a historian until she can find at least ten people who can name either of the two sets of buildings used to anchor the allied position but don't know about the Prussians.
Mind you, ludicrous, provable, inaccuracy has never been a problem for the country's worst historian (and fellow BBC favorite) Mary "Typical Roman Family" Beard 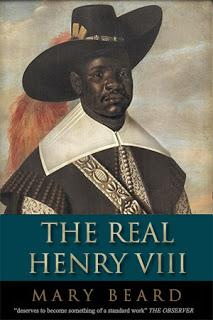