If you were watching TV tonight you’ll have had the chance to see professionals at the top of their game do what needed to be done under difficult conditions – unless you foolishly turned over from the football and watched the clown show at No 10 instead.

Honestly, at this point I’m so jaded I can’t even remember which of the Doom Brothers is the actual Prime Minister. Whitty or Vallance? Who cares? They’re basically clones anyway.

Nope, my mistake: it’s actually the Blonde Bumshell that’s PM, so basically the job of balancing the scientific advice – we’re all going to die -  with the wider needs of the country falls to a guy who hasn’t yet mastered use of the condom.

I take it all back: we are doomed!

At least we’re doomed unless we have a lockdown – you know kind of like the three week lockdown we had from March until July, except more so. It’s kind of a Spinal Tap lockdown this time – it goes to 11 so it’s bound to be better.

It turns out Lockdown 1.0 wasn’t a True Lockdown, in fact True Lockdowns have never been tried… sort of like communism, except under communist systems you have to queue to get into the shops, you can only buy the bare essentials once you’re in there and the media is a mere government mouthpiece endlessly parroting the party line even if they were saying the complete opposite the day before.

So, you know completely different.

Honestly, at this point we may as well have elected Dear Ol’ Jezza. True, there’s the whole ‘anti-Semitic lunacy’ thing but given how much effort 77 Brigade is putting into pushing the meme that the lockdowns would totally have worked except for evil rebels, it can only be a matter of time before the Government starts ranting about sabotage by either the Kulaks or the Jews – and given no one knows what a Kulak is, it’s not looking good for Maureen Lipman.

Apparently, BoJo is pushing his own version of the Third Way: all the downsides of Marxism but with Crony Capitalism too!

On the plus side, BoJo has generously held out the olive branch of allowing people to celebrate Christmas relatively normally – and, seriously, isn’t this why everyone votes Conservative? They want a government with a laissez faire approach to Christmas Dinner?

At this point, I like to think the delay in the press conference starting today was down to BoJo being like Professor Gill in the infamous Star Trek episode 'Patterns of Force' with Matt Hancock desperately trying to get him stoned enough to come out with this garbagelso, that does mean some passing aliens might take pity on us and intervene. After all, the Prime Directive only holds for vibrant, living cultures and we sure aren’t that anymore).

And that’s not the worst of it. The Usual Suspects – hello 77 Brigade – are busy pushing the line that the only problem with our three-week March-July lockdown was that it finished too early and allowed the virus to spread in ‘Eat Out To Help Out’ August.

So, you know, what’s coming next!

They’re not even hiding it. Look at this:

Seriously? That’s their offering: ‘you’ll get used to it’.

Apparently, you’re a conspiracy nut if you wonder what exactly they mean when they talk about a ‘New Normal’ and ‘The Great Reset’ but, BTW, expect the government to be regulating who you can have stop by for tea ad infinitum.

That’s how effective lockdowns are! You just need to keep them in place for ever and everything will be fine! Or maybe not. Who knows? Who cares? Not BoJo, and not Whitty or Vallance, or any of the MSM drones. They’re making out like bandits, the rest of you can go to Hell.

The Pitch Is Grass, The Campaign Is Astroturf

I'm so old I remember when the left was outragously outraged by undeclared political donations and secret backroom deals - but that was then and this is now.
This is just proof that if you want to know what the left is up to, look at what they claim the right is doing, then double it. They've spent years claiming the right is secretly piling up the roubles, meanwhile they're secretly using licence payer's cash to fund a phony-baloney campaign fronted by a multi-millionaire.
This - this - is what they want to make 80 year old widows pay for.
How about advancing the cause of social justice by making millionaires pay for their own publicity? Or at least ask him if he'll donate any future endorsement or sponsorship deals to charity?
Meanwhile, the BBC is claiming to be reporting impartially on a campaign their own people have helped push. Conflict of interest doesn't really cover it.... but if you doubt the political motivation of it all recall this: Markey-Mark was born in 1997. In other words, his years of hunger were under Nu Labour. By the time the Evil Tories came in, he was already embedded in the academy system as a youth player.
Now when was the last time they mentioned that?
Posted by DJ at 10/27/2020 06:03:00 pm No comments:
Labels: BBC, Culture War, Sport

Gary Lineker: The Git That Keeps On Grifting

If I understand his public pronouncements correctly, Gary Lineker believes that going to the shops is just like being on the Western Front, with the ever-present possibility of an invisible killer leaving you dying in agony with 'froth-corrupted lungs'.
Oh... and also he forgot his protective mask.
Huh?
These two things can't both be true. If he really believed there was the possibility of agonising death in every lungful of air, wouldn't he make sure to keep as well protected as possible?
But that just leads on to the bigger question. Lineker has been a High Priest of the Covid Cult from day one, ever ready to denounce the heretics who refuse to wear their Boris Burka. Now it turns out even he doesn't obey his own fatwas. And?
Ah yes, that's the key point right there. The Covid Cultists have suddenly taken time out from blood-curling denunciations of the unbelievers to tell us that, hey, c'mon, it's no biggee. Just one of them things. Don't be such a drag, you guys!
You? You deserve to be burned at the stake if you question whether or not a face nappy can really keep out a virus, but members of the Church of the Covid? They're obviously on the side of the righteous even if they don't, strictly speaking, follow their own demented rules.
That's the issue right there. It's always been the real issue. Just like with the Referendum what it's all about is establishing two grades of citizenship. There's us scum, and then there's the special people, whose lives are too sophisticated and complex for them to be expected to comply with their own rules. Face it, they're just better than us....
Posted by DJ at 10/21/2020 05:53:00 pm 1 comment:
Labels: Better Than You, Covid Cult, Science, Smarter Than You

I've Got 'Wish I Was In Stockholm Syndrome'

While Sweden is open for business, we're all still chained to the radiator in Matt Hancock's cellar.
What's worse, some weasels even lobbied for the latest set of restrictions:

Mayor of Liverpool Joe Anderson has called for a 'circuit breaker' or stricter lockdown to stop the spread of the virus.

He told The Daily Telegraph last night: 'For me, it is only a matter of time because the virus isn't able to be controlled in the city with the restrictions we have now.

'We need a circuit breaker or stricter lockdown to try to stop the virus spreading. 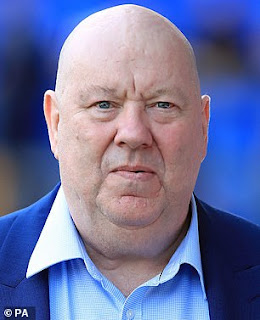 I know what you're thinking but no, it was actually his brother who was strangled by Princess Leia.
At least we've found one guy who might actually get some protection from corona through wearing a Boris Burka - just as long as he keeps it on all day.
I'm guessing it makes sense though: virtue signalers are almost uniformly amoral scum, so why wouldn't a health nazi be a physical wreck?
You know you're a leftist when... you're worried about your health so you want everyone else to change their lifestyle.
Joe is fat so the rest of us have to stay indoors - but at least we'll be safer there, right?
Oops.
No, my bad! Turns out the sunlight/Vitamin D thing has been debunked by research. And when I say 'research' I, of course, mean 'no research at all'.
So, for those of you keeping score at home, HMG is lobbing huge amount of cash at various megacorps to trial dubious new technologies, but they can't spare pennies in the pound to check out a perfectly safe, easily available, potential treatment.
Like I keep saying, it's not a 'conspiracy theory' if it's something they're actually doing.
Also, I'm starting to think we owe Captain Edward Smith a posthumous apology. At least he only hit the iceberg once. If Captain Hancock had been on the bridge, the Titanic would have been bouncing round like a pinball.
Meanwhile, in das Reich, they're trying something else. Remember how a lot of the early cases were people who'd shared private jets, chalets in ski resorts or the like?  In other words, places with very little actual air flow? The Germans do, hence why they're trialing a whole new technology, called a 'window'.
It's not as daft as it seems. Infection not only requires exposure to the virus, but exposure to enough of the virus over a short time (think of it as needing a high enough dose). In fact, I'm sure our government will soon go the same way, just as soon as they can work out a way to give BAe Systems a one billion pound contract to develop smart windows connected to the internet.
Right now though - not being liberals - we're free to do this stuff for ourselves: don't eat like a pig, maintain a balanced diet, get out in the open air as much as possible, and keep a good airflow if you must stay inside.
You know, sort of like your mother always told you to do. In fact, one might even say this kind of knowledge was the accumulated wisdom of generations of our ancestors on dealing with this sort of thing.
Say, wasn't there an organisation that used to support this kind of thing? Some kind of group for conserving traditional values?
Beats me: I'm stuck down here, chained to the radiator, with Matt Hancock screaming that I put the muzzle on my face or I get the hose again.
Posted by DJ at 10/04/2020 02:06:00 pm 1 comment:
Labels: Freedom, healthnazis, Nu Tory Revolution, Science
Newer Posts Older Posts Home
Subscribe to: Posts (Atom)