Have a bucket handy before reading this. The whole thing reads like a right-wing parody. My favourite bit is where she claims she's lost faith in the police. That'll be a blow for PC Plod - after all, as the saying goes, when you've lost the deranged Islamofascists, you've lost the country.

Actually, that's the most amusing thing about all this. This piece of degenerate filth has chosen to speak out now as part of the Left's campaign to undermine anti-terror legislation. That's how deluded the civil liberties nutters are, they really think the Lady Macbeth of Islamofascism makes a sympathetic poster girl for the horrors of life in the Britannic Reich. Newsflash Libs: most people think this is the type of person the police should be investigating. I guess Britain must be pretty free after all, if the closest the Left can get to a police state atrocity story is PC Plod investigating the associates of mass murdering terrorists.

Down in the comments, that Nazi Ross suggests that Little Miss Victim's photo shoot doesn't exactly suggest a woman distancing herself from Islamofascism. Personally, I don't see what the problem is. 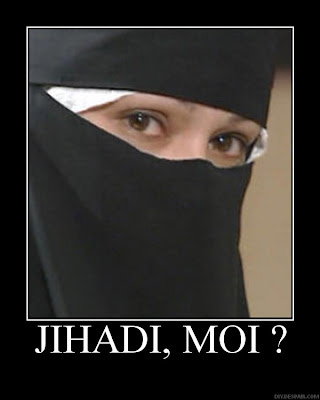