In so far as the left keeps stamping its little feet over unfair generalisations, its interesting how they do love using the word 'Asian'.

Call it a hunch, but I'm guessing this guy isn't a Sikh, Hindu, Zoroastrian, Buddhist, Confucian or Ba'hai.

Hmmmm.... guess they'll need a whole new set of adverts. You know, for such a tiny group of extremists, Islamofascists don't half turn up a lot. Meanwhile, I'm guessing at the likely response to an airline refusing to sell a ticket to a guy in full Islamic regalia. I'm sure all these moderate Muslims will be denouncing this guy any time now....

Also exposed: the left. They've been putting all that effort into taking out onions for the troops in Afghanistan and Iraq, but the bottom line is as it always was: they think soldiers are scum. Liberals wail and whine about made up Islamophobia, even as they pat each other on the back for slandering the troops. Still, in so far as the officer concerned has withheld his name for fear of retribution, while the Islamofascist is able to carry on regardless, I'm guessing this Islamophobia may not be all its cracked up to be.

Finally, of course, there's example number 2237555 of why conservatives shouldn't get all misty-eyed over big business. Yes, it's tempting to have some sympathy with a group of businesses defamed so frequently, and so ludicrously, by leftards, but that doesn't change the fact that the corporations have been the Quislings of the culture war. I'd put good money on BP having reams of documents dealing with diverse equality multi-culti drivel, but when they find they've accidentally recruited a fascist barbarian, what happens ? Ah yes, 'retraining'. That'll work:

Welcome to training, Mr Abu Jihad. Do you mind if I call you Mohammed ?

I kill you, Infidel son of pigs and monkeys

Err....OK, Mr Jihad it is then. OK, first question: what should you do when a customer comes into your garage in uniform ?

Behead him, then take his women as your slaves 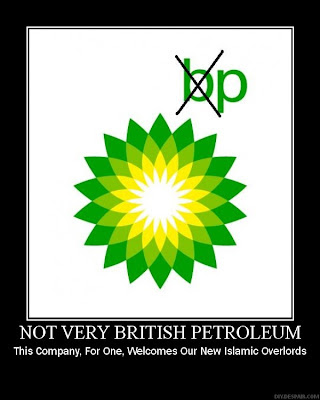