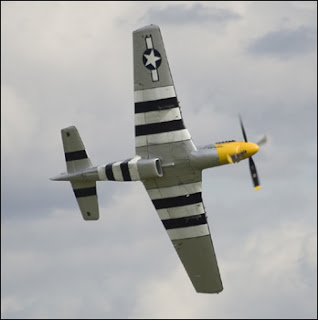 Would anyone be surprised..?!

It did have our engine you know.

Alas, in summer 1940 all the Septics had was the Curtiss Kittyhawk and the Bell Airacobra P39.

Are they not D Day invasion stripes.

They are indeed invasion stripes.

House of Dumb. I commented on this as did my co-blogger. We used words and you demonstrate what 1000 of them are worth. Bravo!

Cadillac of the Skies

Chuck Yeager is still with us, though I don't think he's ever thanked the Brits for commissioning the thing in the beginning.